Decade of Nightmares: The End of the Sixties and the Making of Eighties America 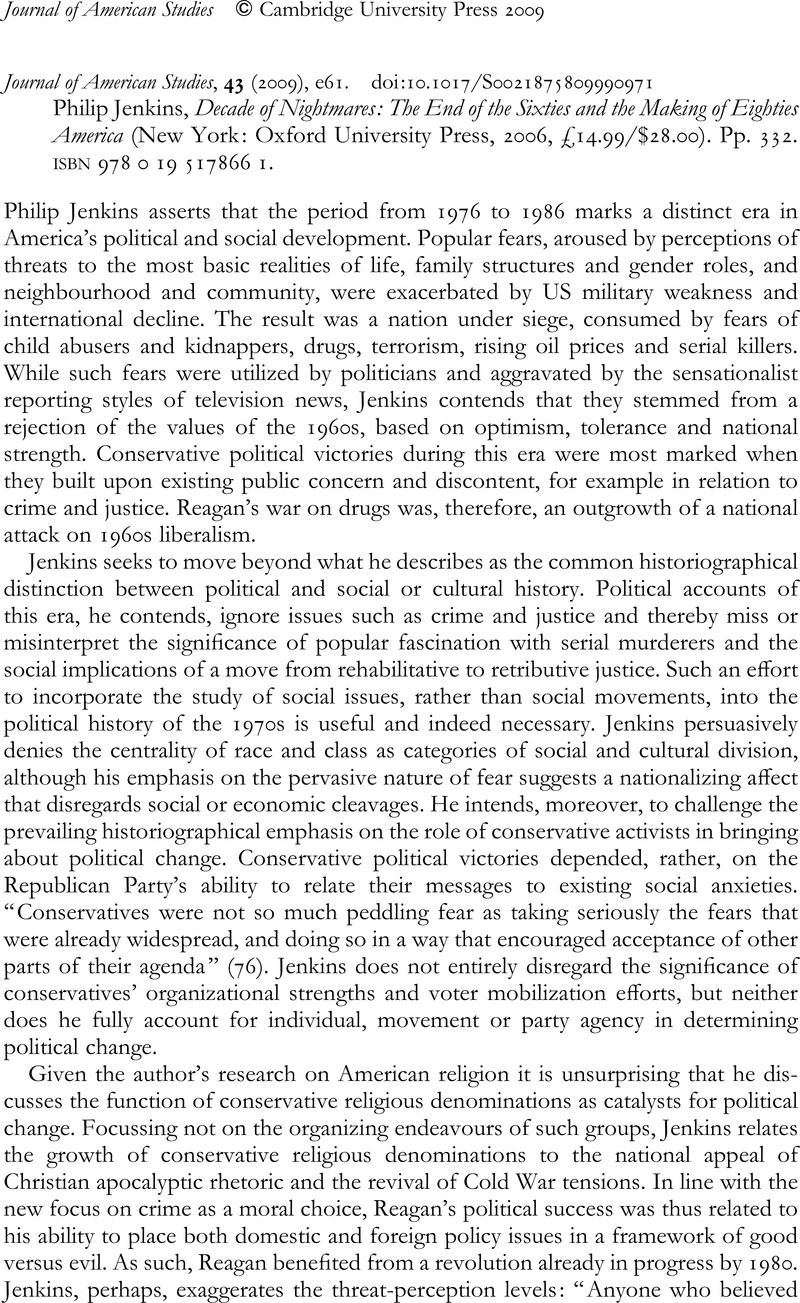 I'd like to be notified of new arrivals in the following categories.

Publisher: Oxford University Press , This specific ISBN edition is currently not available. View all copies of this ISBN edition:. Synopsis About this title Why did the youthful optimism and openness of the sixties give way to Ronald Reagan and the spirit of conservative reaction--a spirit that remains ascendant today?

Review : "Jenkins has produced a humdinger A rich, surprising reading of what Tom Wolfe in christened the Me Decade A bracing re-imagination of an era Ideas of relativism and complex causation were replaced by simpler and more sinister visions of the enemies facing Americans and their nation. And the forces of evil arrayed against us were conceived in terms of conspiracy and clandestine manipulation.

These concerns focused on a number of outside enemies, most obviously the Soviet Union, but there were countless enemies within. In the political rhetoric of the time, these diverse groups personified the immorality and outright evil that had arisen in consequence of the moral and political decadence of recent years.

Conditions were bad, it seemed, because sixties values had let them get so bad.


It is common wisdom, of course, that the conservative turn of the early '80s represented a backlash against, and a repudiation of, the naive but hopeful values of the '60s. But Jenkins' intelligent and judicious account of the period is nevertheless enlightening, largely because of the care he takes in identifying the deep themes that united Americans' attitudes toward perceived threats of varying natures and, one might have thought, quite distinct orders.

Consider, to take one of Jenkins' central examples, the paranoid tendency to insist on seeing every threat or potential threat not as an isolated phenomenon but rather as an element of a conspiracy.

Once this tendency takes hold, as it did powerfully during the "decade of nightmares," it becomes the dominant interpretive metaphor in terms of which all dangers and indeed all politics are understood. And the resulting picture is, almost inevitably, an apocalyptic one whose adherents see their country as besieged by a wave of evildoers, its very existence hanging by a thread. This is most obviously so on the global scale, where, in the late '70s American mind, the Soviet Union goes from "adversary" to "evil empire," revolutionaries and insurgents in various countries all come to be seen as part of a vast creeping communist menace, and the phenomenon of terrorism is transformed from a tactic of the desperate into an international network for whom evil is not a means but an end.

But the transformation is all the more startling -- and Jenkins' portrayal of it all the more compelling -- in the context of domestic threats.

Decade of Nightmares: The End of the Sixties and the Making of Eighties America

The post Vietnam era is thus more dominated by fear and a resulting trend toward conservatism, with less emphasis on progress and less openness to change. It is this fear that has led us around by the nose for the past few years and in my opinion led us straight into the apparently illegal or at the very least ineffective policies of our present government.

In a way I think our reluctance to absorb and reflect on the jazz of the sixties and seventies stems from a similar fear. The adventures of the sixties and seventies challenged listeners, and in reaction it became comforting to hear music that harkened back to an earlier time and pretend that those changes never happened. But I would say that, since the onset of Reaganism, there has been a general tone of fear surrounding challenging music.

I have a hard time taking that cynical a view. Yes, to sustain ever-larger profits, corporations have to take a lowest common denominator approach to culture. I guess this is all part of my obsession that in order to move forward we must understand the past.

Is there a writer who can take on the project of an unbiased overview of music since the end of the Vietnam war? The typical problem with this project is defining jazz — the music is so stylistically broad. Where do you draw the lines? 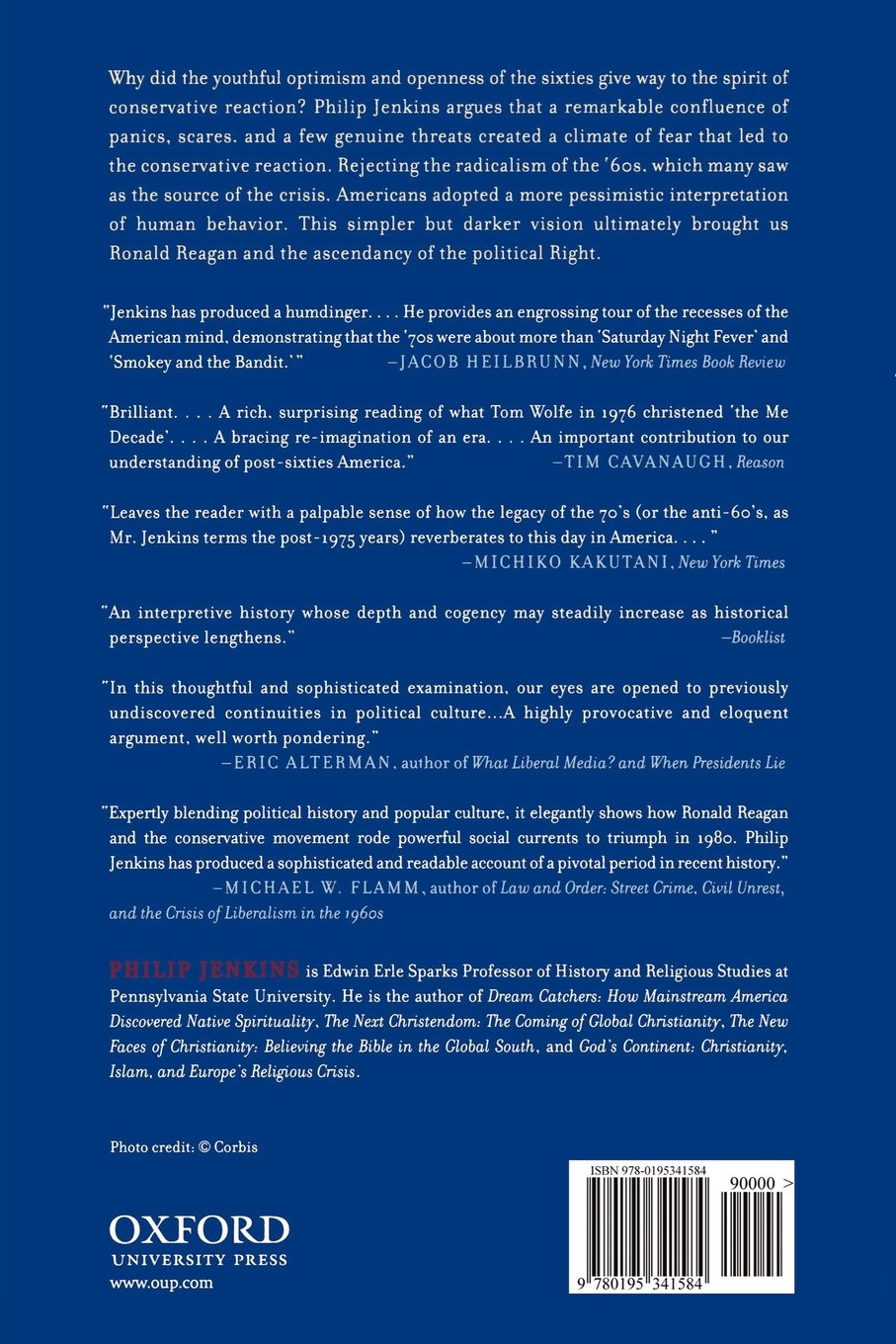 What do you include and what leave out? That has remained the stubborn, unanswerable question, though many would insist they have the answer.


I believe history can be told without obsessing over definitions.